A camper’s searching questions are brought home one evening in the presence of his prayerful counselor.

“Oh, these vast, calm, measureless mountain days, inciting at once to work and rest. Days in whose light everything seems equally divine, opening a thousand windows to show us God.”

The quote above from John Muir is where Adventure Unlimited’s mission originated almost 60 years ago. The following story is a beautiful example of how campers and staff are “Opening Windows to God” at the A/U Ranches every summer.

Coming off a difficult year, during which he had struggled in high school and associated with people and activities he says he shouldn’t have, Wyatt—who had attended camp for four summers—wasn’t planning to return.

“I felt depressed and so unsatisfied with the person I was becoming,” he says. But the more he thought about not attending camp, the more he realized how much he needed it.

Wyatt arrived in Buena Vista a week later to what he calls the “nurturing environment” he’d been missing. But the real change didn’t take place until he went on a five-day backpacking trip. The following is Wyatt’s account of what happened during that excursion:

It was the end of the first day out and I was standing alone outside our campsite, looking out at the green expanse of meadow that lay before our tents. The sun had just set and the color was slowly fading from the landscape. That’s when Austin approached me. Austin was one of four counselors in my program, and we had already gotten to know each other fairly well over the course of the first few days. We had kept each other laughing all the way to the campsite, and it was obvious that we had similar interests.

Now as we spoke, I told him about my situation, how I was having trouble finding beauty and satisfaction in life. He told me to look out at the view. Beyond the dark meadow, black silhouettes of towering pines rose up before the hulk of Mount Massive on the horizon, ribbons of white snow sparkling beneath the bright moon that hung overhead, wisps of cloud drifting past the flourescent disc. A net of infinite, twinkling stars was cast across the vastness in a dazzling arc above us. It was a stunning sight.

Austin told me that “to find satisfaction in life, all we have to do is seek to glorify God.” He looked out at the view. “This is God. I mean, what else could this possibly be?” Staring out into the night, I knew he was right. As I gazed past the trees and into the sky, I could feel my eyes welling with tears, totally moved by my surroundings as Austin spoke to me. “The beauty in life is all around us. We just have to seek it out, and in doing so, we will glorify God. Just like those trees, the mountain, the sky, you are a perfect expression of God.”

When I woke up the next morning on my 17th birthday, I felt different. Looking up at the roof of our tent from my sleeping bag, I smiled. For the first time in a long while, I felt excited—not just for the rest of our beautiful day of hiking, but for the rest of my life. I felt like I was finally the person that I wanted to be.

That night changed my life. I’ve gone to camp over the years for many reasons, but never knew it would all amount to such a watershed moment. If Austin and I hadn’t spoken that night, the person that I had longed to become may have remained nothing but a dream. Adventure Unlimited has had an immeasurable impact on who I am as a person, and has provided me with truth and meaning when I needed it most. For that I am truly grateful. 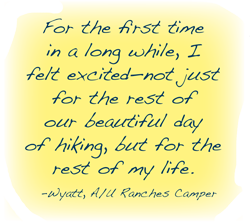 Austin’s alert response to Wyatt’s need to talk came from a challenge issued to Ranch staff at the beginning of the summer: to think about how they could make a difference in the lives of their campers and take that extra step to reach out to them.

“The conversation started when I saw that Wyatt was standing alone and pondering something,” Austin recalls. “I could have just let him stand there, but something called me to go and talk to him. When I did approach him, he looked at me and, after a pause, asked, ‘How do you find the beauty in life, Austin? You seem to do it so well.’ I realized that God had called me to help Wyatt, but I had no idea what it was about.

“I will admit I was scared that I would say the wrong thing, so I just let God talk through me,” Austin continues. “I remember saying, ‘The reason, Wyatt, is that God loves me enough to give me this life, and to thank Him, I live my life for the glory of Him who created it.’ I told him that all there is, is just Love, and expressing that Love is bringing God into Life itself. I told him he had a purpose in life and that his value was to do God’s work so that others may see his example and follow it. At the end of the talk, we were both in tears. No one was telling the other how to live, but God was telling both of us his undeniable truth.”

Both boys were changed that day. “I, too, gained inspiration and focus from that talk and took away a deeply abiding love for my purpose at camp and in life,” Austin says. “It was the most valued summer of my life so far. I thank Adventure Unlimited with all my heart for the opportunities it has given me over the last nine years and for the blessing I have received this summer.”

Wyatt’s mom, Eliza, says her son has continued to put into practice daily all that he gained at camp. Truly, she says, “it was a life-changing experience for him this summer.”

The A/U Ranches, located in Buena Vista, Colorado, are a cornerstone of our programming. The supportive and inspiring atmospher cultivates confidence and develops moral courage for Christian Science youth, adults and families. Activities are offered year-round, including a community outreach program, 100 Elk, which serves those of all faiths and economic diversity.