Revealing the Servant Leader Within

Moving outside her comfort zone far from home, a teen discovers her innate leadership qualities – and healing – in a strong peer community.

Great leaders – whether Christ Jesus or the teacher in your neighborhood school – inspire others to act by their example. Ricardo, who lives in Guatemala with his wife and daughter, has been an inspiration to Rachel, a student in the DiscoveryBound National Leadership Council (NLC) 2018C class.

Rachel met Ricardo during the service trip her NLC class took last summer, a component of the program’s third-year curriculum, when the teens volunteered at an after-school program called Proyecto Genesis. The program originated from Ricardo’s desire – after the birth of his daughter, Genesis – to help children learn, since educational support in Guatemala has limitations: Typically school lasts just half a day, many children drop out early to work with their parents, and some children don’t have adequate learning support at home.

“Proyecto Genesis started as a place for kids to go after school to get help with homework, learn a little bit of English, and to have fun playing with other kids,” Rachel says. “At first Ricardo had to ride his bike all the way from Antigua to a rented plot of land where he met the children, financing the project with his own money and time. Now he has a building, provides a snack every day, and picks the kids up in his truck. His story makes me want to be a more selfless person who can make a huge impact on their community.”

Rachel and her class played soccer with the children and taught them English, in addition to doing some construction in a nursing home. Some of these activities stretched her outside her comfort zone – a key part of the NLC program intended to help teens find strength and improve their leadership qualities by turning to God. 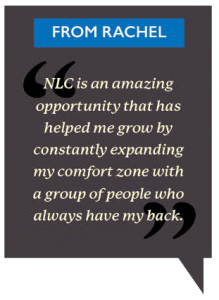 “I’ve taken Spanish at school, but I never had the confidence to use it,” Rachel explains. “I was nervous about teaching English to Spanish-speaking kids. However, from the first day I never really had the chance to be nervous about it because we were thrown right into teaching, and not very many of the people in my group spoke Spanish. I trusted that God would help me know what to say, and I ended up communicating pretty smoothly. The kids were so nice and loving, and not intimidating at all. I loved being around them!”

While developing servant leadership skills, Rachel also had an opportunity to prove God’s laws when challenged with a deep cough. One of her classmates shared a paragraph from Science and Health with Key to the Scriptures (Mary Baker Eddy) on p. 384 that took root in Rachel’s thought. It reads, in part, “God never punishes man for doing right, for honest labor, or for deeds of kindness, though they expose him to fatigue, cold, heat, contagion. If man seems to incur the penalty through matter, this is but a belief of mortal mind, not an enactment of wisdom, and man has only to enter his protest against this belief in order to annul it.”

Although she was familiar with the passage, “this time it really stood out to me,” Rachel says. “I continually thought about the fact that spreading love while helping others could in no way expose me to error,” she recalls, “and each time I coughed, I silently protested against the falsity of that seeming reality.”

Rachel also received help from the Christian Science practitioner on the trip. “She said when we seem to be dealing with an issue, we must recognize that error is trying to tell us we are separated from God, but that’s ridiculous!” she says. “God is always present, everywhere, and as his child and reflection we can never be separated.”

She continued to work with these ideas, including Hymn 136, which was particularly helpful during a hike on the San Pedro volcano. “Though the coughing troubled me a little at the beginning, it soon ceased and didn’t bother me for the rest of the trip,” Rachel says. “I was so grateful for the healing and demonstration of my connection to God!”

Rachel’s experience in Guatemala – including seeing Ricardo’s selfless work, losing her own self-consciousness when teaching, and overcoming an aggressive cough – revealed her own leadership qualities. In one instance, as the group was returning to the U.S. via a brief layover in El Salvador, Rachel helped the appointed student leader of the day guide the group from one airport gate to the next when she saw her friend was feeling frazzled.

“I love being in NLC,” Rachel asserts. “Joining it was the best decision I ever made.” In addition to growth in leadership and spiritual development through working toward the Congressional Award, the strong bonds she’s made with her class have made an impact on her life. “My NLC classmates and leaders are more than friends. I’m so grateful to have them to support me and to be able to support them. I love having 20 people one text away who can pray for me in a moment of need.

“NLC is an amazing opportunity that has helped me grow by constantly expanding my comfort zone with a group of people who always have my back.”