Immediate prayer brings a quick healing when a camper is thrown from a horse.

Like all of the summer camp majors at the A/U Ranches, Horsemanship pushes its riders to put their whole trust in God and overcome limitations.

Grace was pushed in an unexpected way last summer. A Sky Valley camper, she had barely settled onto the back of her mount when the horse bucked, throwing her. Instantly the staff were at her side, offering powerful statements of truth and holding to the spiritual reality of man’s perfection.

“We knew that everyone was praying, including her fellow campers,” says Susan Collins, the onsite practitioner who was called to pray for Grace.

Susan sat down next to her on the ground and heard Grace say that she couldn’t move anything.

“The thought of God’s law came distinctly to me, particularly the fact that God’s law was above any and all human, material and medical law,” Susan says. “I proclaimed and held to the fact that this dear young woman was about her Father’s business, and thus couldn’t be hurt – that God had sent her to this camp, and into this very program. So she was about His business, and couldn’t suffer for this obedience.” 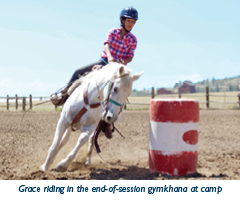 After a time, Grace moved one of her legs, which was met with cheers. She was carefully moved on a stretcher to Highview, the nurses’ facility, and once in bed, she was given a message from her parents filled with supportive inspiration, warmth and affection.

“We had prayed deeply in preparation for the summer and put Grace firmly in God’s hands,” says Grace’s dad, Rob. “So when we received the call that Grace had fallen from her horse and wasn’t able to move, we were able to quietly and firmly know she was safe in her Father-Mother’s arms.”

Since she had been lying in dust and horse manure following the fall, one of the staff offered to wash off her arm. Without hesitation, she lifted it up! More yelps of joy erupted. 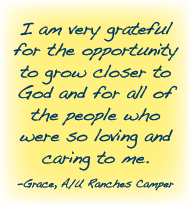 Grace had been keeping her thought on God. “The practitioner suggested that I work with the concept of God as a shepherd and me as the sheep,” she explains. “This was helpful to me because the shepherd never loses track of where and what the sheep are doing. The sheep have constant care and safety.”

After a short time speaking with Susan, Grace asked if she could go back to her cabin and take a shower. “I said, ‘Of course!’” Susan recalls. “She then got up and went all on her own. She didn’t want support. She couldn’t wait to shower and wash her hair.”

That night Grace went to dinner and slept in her own cabin. Ten days later, she participated in the camp rodeo and took first place in the barrel race for her division.

“It was Grace’s healing, and it enabled her to experience God’s ever-present love for His children,” Rob says. “It was also a powerful proof of the effectiveness of Christian Science treatment for everyone else at Sky Valley to witness.”

“I am very grateful for the opportunity to grow closer to God and for all of the people who were so loving and caring to me,” Grace says. “Even though I was fearful, I learned that there is no reason to be, because God is always in control.”

The A/U Ranches, located in Buena Vista, Colorado, are a cornerstone of Adventure Unlimited’s programming. The supportive and inspiring atmosphere cultivates confidence and develops moral courage for Christian Science youth, adults and families. Activities are offered year-round, including a community outreach program, 100 Elk, which serves those of all faiths and economic diversity.