Away from the A/U Ranches for several years, a former camper returns as a staff member and reconnects with a sense of home and an understanding of Christian Science.

“My first summer at camp was after 6th grade, and, as many kids are at that age, I was feeling lost and unsure of myself,” says Chris Muller. “I was completely blown away by my first camp experience. A huge part of that was the incredible staff of counselors guiding and supporting me every step of the way.” So after graduating from college last summer, he knew what he wanted to do: come home and be a part of helping someone else find their place at the A/U Ranches.

“Camp is a place where everyone is given the chance to learn how to shine their brightest,” Chris reflects. “It was one of the first places outside of my home where I was told that I belonged, that I was loved, and that I was capable of doing amazing things.

“Camp is also a place where I feel like you can really learn what it means to be a Christian Scientist,” he continues. “I didn’t know what made my church so different and special until I came to camp. I didn’t know how to live as a Christian Scientist and let it shape my view of the world and people around me into a spiritually guided one. Camp gave me all of that, and I’m so grateful for it.”

Chris had always felt like the A/U Ranches were home, but he was concerned that a lack of engagement with Christian Science for four years “might be jarring.” Instead, he was “welcomed back with the exact same spirit that made me fall in love with the A/U Ranches in the first place,” Chris says. “Feeling so welcome and accepted after such a long time away by both old and new friends just further cemented the fact that camp is a home.” 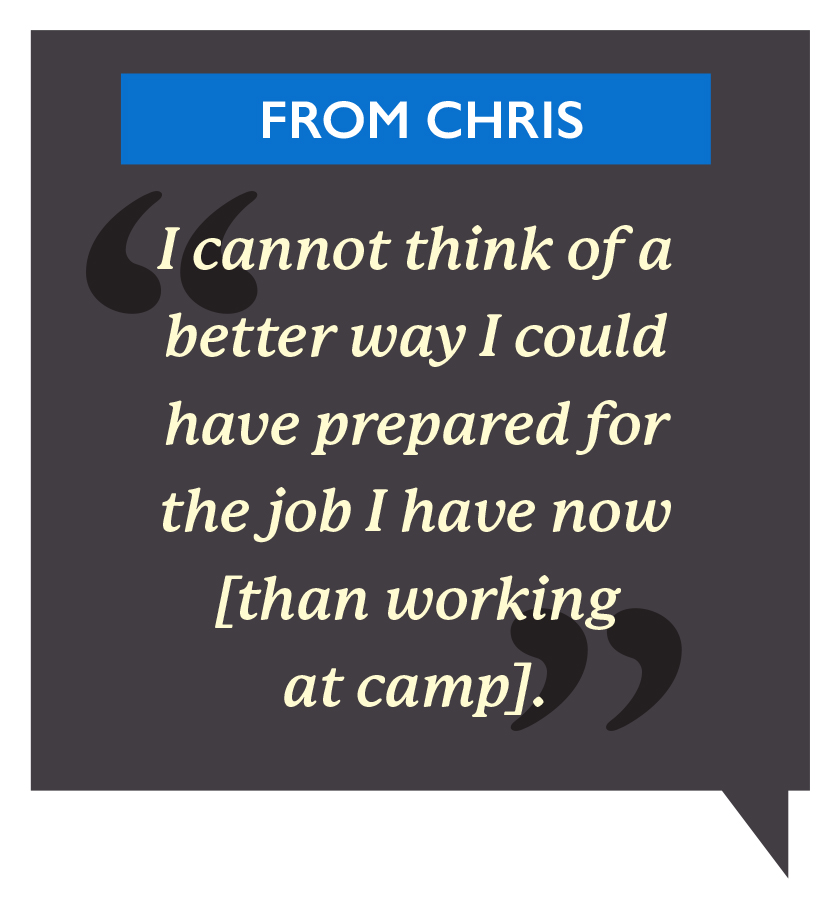 He felt the powerful impact of camp while on a three-day trip last summer. A camper had been concerned he was going to have a negative experience, and continued sharing this through the morning of the second day as the group made their ascent. Close to tears, he demanded they stop at one point, so everyone took off their packs, ate some breakfast and read the Bible Lesson together.

When they continued on, the camper never once uttered a complaint for the rest of the journey. “He had undergone a complete change of thought during our Lesson study, and it showed in his newly accelerated step and comments about how incredible the view from the mountain was,” Chris recalls. “It was such a beautiful demonstration of changing thought, and it gave new energy to the entire group.”

Experiences like this – as well as “the incredible staff, the supportive atmosphere, the learning and discovery about myself and Christian Science” – have inspired Chris to return regularly to the A/U Ranches, he says. And, he adds, “Above all, I came back for the adventures. The hiking trips, the climbing, the rafting, the eco stratego game, the South Woods runs, the peak climbs, every second of it kept me coming back year after year and always wanting more.

“I didn’t fully appreciate for a while that the reason these adventures were so special was because of the spiritual context and education going on during them, but once I did it just furthered my enjoyment of them,” Chris continues. “It became about more than just pushing myself to do new and exciting things. It became about demonstrating divine Truth while doing them. I’ve gone on a lot of adventures in my life, but the ones at camp will always be the most special because of the amount of growth that followed them. Even as a counselor that holds true.”

Chris is now teaching math and science to 7th– and 8th-graders in Honduras. “I got a lot of practice managing groups, leading activities, and actually some practice teaching in the form of leading Sunday School,” he says of his summer on staff at the A/U Ranches. “Learning how to handle a group of teenagers living together in the bunkhouse was invaluable. I decided to work at camp before I decided to teach, but I cannot think of a better way I could have prepared for the job I have now.” Chris plans to return as a staff member to the A/U Ranches in the coming summer after his year in Honduras.

Reflecting on his time as both camper and staff member at the A/U Ranches, Chris recognizes the significant impact it’s had on him. “I received a ton of emotional support and the tools to handle difficult times during what are usually accepted as the most trying and confusing years of a person’s life,” he says. “I learned how to be a more loving person at camp, and that is something I have carried with me every day since that first summer. I would also not be nearly as into Christian Science as I am now without camp, possibly not even involved at all anymore. Camp was what brought the religion to life for me, and that has let me keep it with me so constantly ever since.”