Following and Rejoicing, Without Limitation

A teen feels God’s guidance at camp and takes it back home to a new school.

Lucas sees his life’s current trajectory as taking an important turn last spring at what he thought would be a “boring” camping trip. “I was going away from my games, away from my friends,” the high school sophomore relates. “That was the outlook when I got there.”

“There” was Jetty Park, Florida, and the camping trip he went on with his parents and younger brother was the annual DiscoveryBound (DB) Outreach weekend event that draws families from the southeastern United States. But Lucas says he started seeing how “awesome” it was, and in the end, his first DB Outreach weekend introduced him to Christian Science camps and, ultimately, Principia Upper School.

After considering all of the camps, he chose the A/U Ranches because it offered him something different from the water he’s around every day in Florida: mountains. “I searched for something to get out of my comfort zone,” Lucas says. “It really made me learn more about myself and about God. Since I did not plan to do any of this and I never had any past experience in it, everything would be a discovery.”

Lucas and his brother, Ian, who’s eight, initially signed up for a one-week session. “But then when I got there, everything changed,” Lucas says. “It was so awesome to be there with everyone in this energy that felt like compassion, like the atmosphere of love. I didn’t really want to leave there yet.”

The boys’ mother, Ana, recalls the excitement in her sons’ voices when they called home after the first week. “It was so funny because I was waiting for a call and ‘hello,’” she laughs. “They were immediately asking, ‘Mom, can I stay for one more week? It’s so wonderful, I love this, I love that.’ They felt so embraced in a big family. It’s not bad that they didn’t miss us. They were so filled with love. I thought, this is a big sign that they are loving this moment in their lives. How can I say no?”

“I felt like I got more experienced and I discovered more the second week than in the first week,” Lucas recalls. “The first was just breaking the ice and then the second week is when I really loosened myself up, got out of my comfort zone completely. It was the fun part.”

Coming up with additional funds to cover the cost of changing flights and to complement campership support seemed daunting, but Ana says she knew God would supply all they needed, as she had seen when they first signed up for camp. “It never created any extra difficulties for us,” she says. 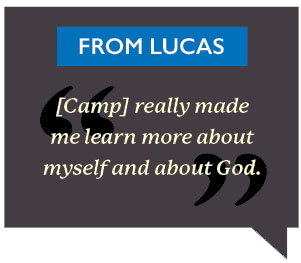 In fact, Ana was amazed at the growth she saw in Lucas after camp. “He didn’t do a lot of exercise at home,” she says, yet peaking a 14,000-foot mountain was a highlight of his two weeks in Colorado. Here’s how he describes it:

I had this idea that I had asthma as a kid, and peaking mountains is not really good for people who are asthmatic. Even though I’ve been healed from asthma long gone, that little thought crept into my head that you’re running out of air because you had asthma as a kid and that’s coming back to you. I realized that in the middle of the way up, and I started singing “Shepherd, show me how to go.” It was really strange because it started to make sense. It clicked. When I got to “I will follow and rejoice all the rugged way,” I pictured myself following my shepherd. I just started laughing because I got it. There was nothing that would stop me from following Him. That’s when I stopped having breathing difficulties and just kept going on. When I got there, I was still somewhat out of breath, but it was nothing like what I was experiencing before.

On the drive home from the airport back in Florida, Ana noticed how confident her son had become. “It was so amazing what he’s saying about this, that he was not alone doing this,” she says. “He was supported by God.

Lucas found that Youth Camp changed his limited view of himself. “Camp really pushed me hard and told me you can do whatever you want – you just have to get God on your side,” he explains. “That really shook a bit of me and told me, you can do anything. You don’t have to limit yourself to what you think you are. You are perfect. I felt really confident about myself at camp.”

He’s taken that idea back home with him, along with his love for the camp activity, “Alone with Your Thoughts.” He had been feeling stressed about a few things, including the uncertainty of where he would attend high school that fall, having submitted an application to Principia Upper School late in the admissions season. “Alone with Your Thoughts really made me meditate and understand that God’s plan is always there, it would always get me from point A to point B, and I’m never lost,” Lucas says.

On the last day of camp, Lucas received his acceptance into Principia. Ana says it was not a coincidence, but “like a big package when you have everything, all of the pieces.”

Lucas has continued to find time to be alone with his thoughts at Principia. “It really gives me strength and brings me slowly closer to God.”