Declaring the Truth During Half Marathon

Teenage camper’s exclamation of the Truth transforms his experience from fear to joy.

It was Nico’s sixth year at camp when he decided to join a program that was outside his comfort zone. He joined Conquerors – an intense, higher-level mountain program at Round-Up Ranch (for high school students). As a swimmer, he had always felt more comfortable doing water programs at the A/U Ranches, but he wanted to follow in his brother’s footsteps and push himself to try something new.

“I was not the kind of guy you would catch running a half marathon,” Nico says.

During the program, the group went on a 13+-mile trail run called the Denny Creek run. Nico says he was “terrified” leading up to this rigorous day; he felt like he had something to prove when compared with his brother, and he just wanted to finish the run.

At first, he says, it was tough, and he felt tired and sore. He struggled to keep going, although he also felt supported and loved by a counselor, who ran alongside him singing hymns, “Rise Up and Walk” and “Tender Mercies.”

Then something happened that completely changed Nico’s experience. “Once we got above tree line, everything started to get really pretty, which was a nice thing, but I was still struggling,” he recalls. “At this point I was running alone. The counselor was a few steps behind me. There was this one moment out of nowhere where I said to myself out loud, ‘I love this!’”

It was the turning point. “That was a declaration of the Truth, which is always what I’ve seen a healing as – the recognition of what God’s truth is, and that was what I did in that moment,” Nico says. 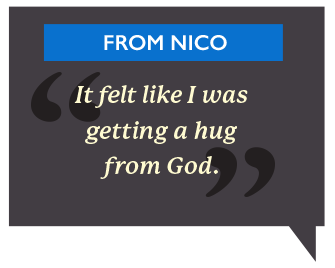 The impact of this quick recognition of God’s truth was huge for Nico. “I started to feel this really pure feeling start creeping up from the small of my back,” he relates. “In a few more minutes it had completely taken over me. I don’t ever cry – I couldn’t tell you the last time I cried before that – and this emotion was so powerful that I was feeling that I couldn’t help but cry. I was bawling on the side of Yale [mountain] in the middle of this run. I felt it had to be what it feels like to feel God’s true love in all of its presence. It’s always there, but in this moment it was so clear, it felt like I was getting a hug from God. It was amazing.”

Nico’s declaration of the truth changed his whole mindset. He was enjoying the activity instead of disliking it.

“I love the way you live in Christian Science here [at the A/U Ranches],” he says. “You are so distant from what the rest of the world is always yelling at you. There are always things pulling you in every different direction, but here at camp you’re just doing things that you love to do the whole time. There’s never a moment when you’re not having a great time at camp.”

In addition to feeling protected from the rest of the world while at the A/U Ranches, Nico knows it’s important to “bring camp home” – a message shared at the end of every camp session. So every year, Nico tries to take something back home with him that he has learned during his time at camp. He loves that he can apply the skills and ideas gained at camp to his life back home.

With his eyes lit up and a smile beaming across his face, Nico says, “If it wasn’t for the spiritually elevated mindset that camp holds in sharing inspiration every morning and taking everything you do at camp with you, I don’t think I would’ve ever had that experience. First of all, I would’ve never gone on the run, and I wouldn’t have had that pure connection I felt in that moment. For that, I am extremely grateful for everything camp has done for me in my spiritual journey and growth.”

About The A/U Ranches