An eager young man in the Horsemanship program learns to let go of restricting
fears and to harness the joy and confidence of Truth, Life and Love.

Looking at him now, you’d never imagine that Jackson – a confident, calm and horse-loving 6th grader – once had a fear of riding horses. Not only has Jackson participated in several of the A/U Ranches’ horse programs during his four years at camp, but he has also made it a personal goal to work his way through the entire horsemanship program, culminating with the cattle drive.

When Jackson was seven years old, his parents were considering what kind of summer activities might be available to him. A close church friend shared with Jackson’s mother, Tanya, that Adventure Unlimited had recently lowered the age requirement for its summer Youth Camp at the A/U Ranches. “I was over the moon,” Tanya says. “He was ready for adventure, ready for mountains and wilderness and new experiences.”

However, she did have a concern that he wasn’t quite ready to be on his own. “He was extremely shy and had a hard time asking for help, so I was daunted by the idea that his inability to communicate his needs may easily end up in him being overlooked,” Tanya explains. After expressing her excitement as well as discussing her concerns with staff at the A/U Ranches, the option of becoming a bunkhouse parent was offered. This would allow Tanya to be on the property and to be actively involved. 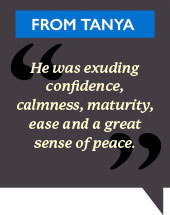 It was a perfect solution. Tanya and Jackson went to camp together for two summers, and by the third, Jackson was ready to go on his own for two weeks. Then, in his fourth summer, he came back for two sessions, trying different majors, wanting to explore all that was offered and joyfully breaking through barriers. “Every year there was something to overcome, and I always did,” Jackson says.

“I never pushed him to go, but followed his lead every summer,” Tanya says. “He always wanted to overcome something, whether it was a sense of homesickness, his fear of horses, the ropes course or the famed three-day camping trip.”

GETTING CLOSER TO GOD

For Jackson, Youth Camp at the A/U Ranches has been a sort of awakening to new possibilities, but, more importantly, to new insights into his relationship with God. At one point, he worked with a camp practitioner to conquer fears and to find joy and peace while at camp.

“One practitioner in particular was especially helpful to me,” Jackson says. “She was kind and loving and put others before herself. She gave me a book about Christian Science soldiers that had healings in war time. This book came in handy for the rest of the session. I read about the men who not only fought in war against the Nazis but also in their own thinking, whether walking out of a prison camp or recovering from serious wounds. It seemed like the dream of it was all based on the same thing – fear. She taught me to not be afraid and to just go and have fun.”

Upon attending the end-of-session banquet last year, Jackson’s parents were overjoyed to see a beautiful transformation taking place. “We saw a change in his countenance that we had never seen before,” Tanya says. “He was exuding confidence, calmness, maturity, ease and a great sense of peace.”

Jackson was so full of joy and confidence that he requested to go back for another session that same summer… and did! “Our son wanted to get better,” Tanya says. “He wanted to thrive, and the A/U Ranches has been the perfect place for him. I am so grateful for the opportunity Adventure Unlimited gives to young Christian Scientists to actively express Truth, Life and Love.”