This year, all of us at Adventure Unlimited are exploring the idea of what it means to live generously – with a clear sense of the abundant good God provides. Warren Clinton is a longtime alumnus and donor who has lived generously with the organization for more than 50 years. He and former trustee Anabeth Cox have donated $100,000 toward a new Hub office building at the A/U Ranches, and he has also invested generously in the Denver headquarters renovation. He shares his experience with us here. 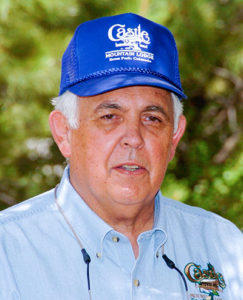 My involvement with Adventure Unlimited started in the early 1960s, when Cap Andrews asked if I would help start a mountaineering program. John Andrews Jr. and I started the program the next summer. We helped the campers learn some basic climbing skills using the correct equipment and techniques. We did lots of hiking on fourteeners, performed some trail maintenance, and worked to instill a love of mountaineering and a commitment to safety.

While attending law school at Washington University in St. Louis, I did bookkeeping for the Adventure Unlimited office in that city. That enabled me to work with the staff there and gain an appreciation for what the organization was doing in the late 1960s. I count this time as one of the real positives in my association with Adventure Unlimited. My bookkeeping was done after classes in the late afternoon or on Saturdays. Often Cap and I were the only ones in the office, and it gave us an opportunity to talk about Adventure Unlimited. Cap told me years later how much he appreciated my candor and willingness to offer ideas and to critique the ones he would present to me.

I was in the land development and home building business when headquarters moved to Colorado from St. Louis in 1971, and I helped scout a location. Then 20 years ago, John Boyman, who was the executive director, asked me to look at the condition of the A/U Ranches facilities. After my tour, the organization assembled a group of architects, builders, construction people and others to meet at the A/U Ranches and review the upgrade needs. Out of that weekend we developed a list of priorities that were completed by raising the needed funds and performing the repairs and upgrades.

Several years later, I returned to the A/U Ranches to tour the work that had been accomplished and discovered some needs in the shop area. Together, we raised funds and built a new maintenance structure now known as Ruthie’s Garage, named after my dear late wife.

For a number of years Adventure Unlimited has invested in activities and buildings that directly support participants. This has resulted in its substantial growth. Now the Denver headquarters exterior and the A/U Ranches’ Hub need to be upgraded to support that growth and provide facilities for the staff to operate efficiently and effectively.

You can be a part of these critical building improvements by making a gift to Adventure Unlimited’s Bridges to the Future Campaign. Under “Choose a Program,” select “Capital Projects.”

Donate to the Campaign