By Lane Brown, National Alumni Board

The duffel bag that I first took to the A/U Ranches in 1988 – a bag so large I could fit my entire third-grade self, and perhaps a couple friends, into it at the time – finally blew its zipper last year. On the side of the dark navy-colored, industrial-weight canvas duffel, in yellow velour, “Lane Anne Keough” is printed in all capital letters.

That bag accompanied me for more than a decade of camp adventures. For nearly another two decades after that, it came with me on multiple trips and moves around the country, including those after my last name changed to Brown when I was married in 2010. It’s been loaded into cars, on planes, on buses and on trains. Despite serving me for so much time outside of my camp life, it will always be considered my camp duffel. 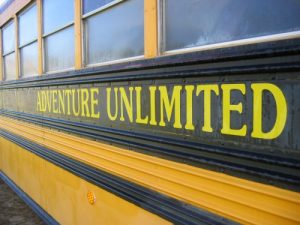 At the end of each camp year the duffel came home with me, packed much less neatly than when I had prepared it a few weeks earlier. Items that had been carefully checked off the packing list before camp and organized neatly inside were now jumbled together, including dirty clothes, a half-used bottle of sunscreen (if that made it home at all) and souvenirs from the camp store. Sometimes they pushed against the zipper of the bag so tightly, there was a bit of a sudden release when it finally was opened at home, like a can of instant biscuits torn open.

Then out of that duffel came memories of camp – the campfire scent on the fleece, on my shirts the smell of the wooden shelves from the cabinet next to my bunk, the dirt crumbs from the trail still stuck in the soles of my hiking boots, and the piece of climbing rope that I used to practice my knots.

Unpacking brought me right back into the experience, each item holding its own story that transported me back into those moments. All the inspiration, joy and friendships from camp came home with me in that bag. I thought about the cool stories I could tell my friends at home about camp, and I thought about my camp friends unpacking their own memories, just like me.

Sometimes packing for camp can feel a bit tedious. We want to get to the good stuff, the real stuff of camp. But before we can take off on adventures – on foot, horse, bike, raft or canoe – there are the details. We need to label our clothes with our name. Perhaps there’s a run to the store for a few last-minute needs. Everything must be laid out in orderly little stacks and double-checked so we haven’t missed anything – and then it finally goes in the bag.

Sure, the official summer packing list is immensely helpful to campers, reminding them of the items they will want to have on-hand to make camp enjoyable and comfortable. But it will never give them half an idea of what will actually come back in the luggage from that inspiring time away, in the form of memories folded in with the clothes.

We still have open spots at Youth Camp! Tell your friends, sign up your kids or help a Sunday School student start an adventure with your support. Learn more