The first of four summer experiences for a teen in DiscoveryBound’s National Leadership Council (NLC) is a two-week outdoor adventure orientation. It’s an environment that brings together the two newest classes in person and kicks off their journey as a family.

During their orientation last summer, the classes had an opportunity to rise up in support of one another when faced with a health challenge. Teens in the 2021P class held a spontaneous hymn sing for fellow classmates who were not feeling well one night, and they continued to support each other with hymns and gratitude. Most of those affected by the illness found healing within a day or two. 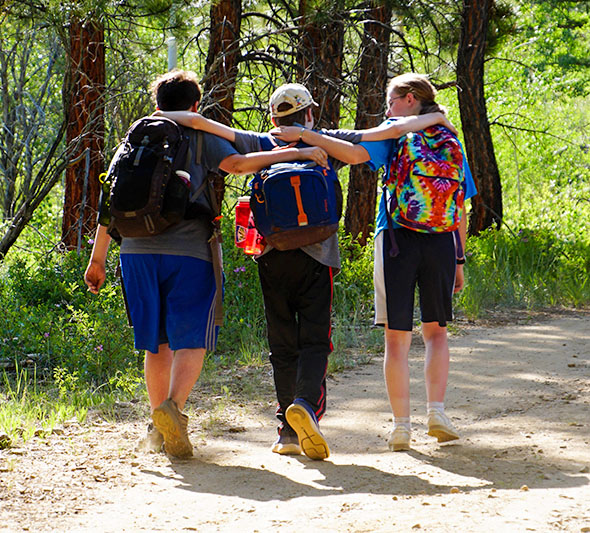 “Having that real-life experience really made me think about how to use Christian Science and how to take charge of the situation,” says an NLC student from the 2021X class. “I was one of the people who weren’t feeling well, so I laid down. My friend came into the room and started reading from Science and Health. Knowing that everyone in my class is praying surrounded me with a sense that really made me feel well and able.”

In addition to the onsite Christian Science practitioners and nurses, parents and mentors of the teens were part of a prayer watch to support them. Kris Proctor, one of the two 2021P class leaders, says the inspiration shared via email by one of the parents to “press on” got her through her “toughest day.”

“It was like he wrote it just for me, and I prayed with it all day long,” Kris says. Hymns 288 and 290, as well as several passages from Mary Baker Eddy’s writings, reinforced the idea he shared that no one could be weary and that God’s protection and blessing were present – such as this one from Miscellaneous Writings (p. 10):

…He has called His own, armed them, equipped them, and furnished them defenses impregnable. Their God will not let them be lost; and if they fall they shall rise again, stronger than before the stumble.

Confirmation of the effectiveness of this prayer came when the site was visited by the local Public and Environmental Health Department in an annual inspection at the end of the two weeks. The health inspectors identified the problem and informed management that other facilities had been having the same issue, but with much more widespread and lingering effects. They shared that there was no medical cure for it and were impressed at its containment at this location and how quickly those affected had recovered.

“Our Christian Science nurse professionally and graciously explained the situation to the inspectors and how the teens were treated with Christian Science,” says Gina Lindquist-Bailey, Adventure Unlimited’s executive director. “We passed inspection, but what we’re most grateful for is the proof of God’s powerful, loving care and the healing that took place for everyone on this trip.”