By Lane Brown, National Alumni Board

It gets dark early as the December days creep up to the winter solstice. The sun dips behind the mountains long before the actual end of the waking day, but I find many don’t really mind when they are nestled in foothills of the Collegiate Peaks.

By the time Christmas Camp rolls around, each chute of Five Fingers is clearly visible, thanks to the snow that has arrived (as early as September some years!) – and those five fingers point right to home.

This home for Christmas was an absolute sanctuary for me one year during my 20s when life was in flux, the kind that comes from placing too much weight on our own plans. I had recently quit a good-paying, steady job with a public relations firm in New York City, and I was trying to find out how to navigate next steps in the big city with my income dwindling to near-zero.

I had been a longtime summer camp alumna, enjoying more than a decade of hiking, camping and climbing adventures, but I had never made it back to the A/U Ranches in the off-season.

“Off-season” is hardly a proper description for winter at the A/U Ranches, however, since camp is bustling in as many ways in the snow as it is when the long summer days stretch sunlight over the valley, even after the dinner bell has rung. There is hockey on the frozen pond, snowshoeing, skiing, sledding, playing games and plenty of catching up with friends, to name just a few things to keep you busy. 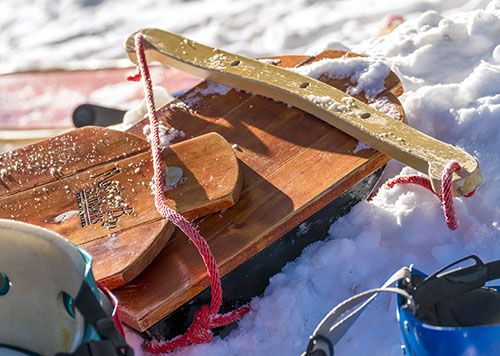 I returned to camp in 2005 as a Christmas Camp staff member, only days after leaving my job. I quickly adopted the role of van driver, shuttling campers between lodging and activities at Sky Valley and Round-Up ranches. My fast-paced city life quickly melted in the snowy mountains as I was given carte blanche and a few milk crates of supplies to decorate the shuttle. When I was done, there were Christmas lights dangling from the van’s ceiling, fake frost on the windows, red velvet bows on all non-moving parts, and enough Christmas cheer to light up the valley each and every night.

The best part of my job, however, was getting to know my passengers. Families from all over came together to embrace camp as a kind of sanctuary, as I had – a place to experience the Christ and share the true meaning of Christmas with others. We joined together to cherish the great gift of understanding God’s complete love for us. My interactions brightened my stay more than any decorations ever could (although the latter were a GREAT conversation starter), and I returned to the city feeling renewed and ready for my next adventure.

That stay at camp helped inspire me to deepen my study of Christian Science, which led to a move across the country less than a year later. In my new home I found engaging work and a thriving church community; I also met my husband while chaperoning a DiscoveryBound event.

We look forward to making it back to Christmas Camp some day with our two children, and I’ll be sure to tell them about the time I decked out the camp van.

Christmas Camp returns this December with new dates – December 23-29 – and there’s still room for you! Find details and register: AURanches.org/christmas-camp.